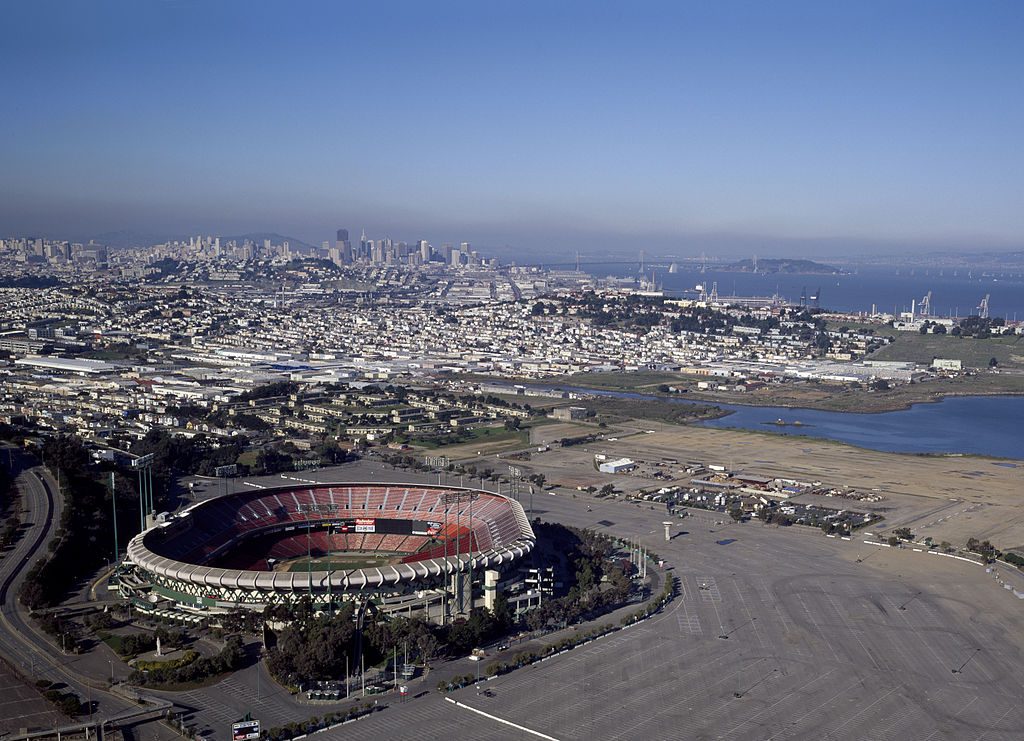 I was in the office at daylight the next morning when I got the call from the head of the San Francisco Recreation and Park Department. “How soon can you get your engineers over here?” he asked.

I was in the office at daylight the next morning when I got the call from the head of the San Francisco Recreation and Park Department. “How soon can you get your engineers over here?” he asked.

My firm, Interactive Resources, had been working on Candlestick Park since 1983 for the City and County of San Francisco, providing a comprehensive investigation of the deterioration of structural and architectural components of the then nearly 30-year old precast concrete structure. Our consulting services included a detailed report on observations, recommendations, and test results, estimated construction costs for necessary repairs for an extended service life. The study determined that the stadium was in serious disrepair and recommended that the park be upgraded immediately to provide a higher level of resistance to potential seismic forces. Interactive Resources subsequently prepared contract documents for structural repairs and provided construction administration services. The repair work went on for some five years, ending in 1988, at which time we were once again called in to resolve water infiltration problems in the newly constructed luxury boxes at the stadium.

Under direction of Clinton, the entire staff of Interactive Resources swarmed over every inch of the stadium for days looking for critical damage. None was found, but surely without the repairs designed and overseen by Interactive Resources for the previous five years, the earthquake damage and subsequent injuries or loss of life could have been catastrophic.

A week later, Clinton submitted his report, and on October 25, 1989, “Mayor Art Agnos of San Francisco, satisfied with the condition of Candlestick Park and Bay Area traffic, gave his final blessing today to the resumption of the World Series on Friday night.” (Click here for the entire article from the New York Times)

According to John Clinton of Interactive, engineers found that damage from the earthquake was limited to some nonstructural concrete chips on the stadium’s windscreen; some minor damage to bleacher stairs, which have been replaced, and cracked concrete, which has also been repaired, around three of the eight expansion joints that permit flexibility and movement of the structure.

Clinton said the repairs were similar to repairs on other parts of the stadium after a 1983 inspection. ”Those repairs held up well during the earthquake,” he said in the statement released by the Mayor’s office.

When the World series resumed, we all got complimentary seats right behind home plate. As an extra bonus, I remember John Clinton’s daughter caught a high foul ball that sailed over the backstop.

That was, unfortunately, the high point of our professional relationship with the City and County of San Francisco.

Back in those days, we had contracts for several really high profile projects in San Francisco, including the rehabilitation of Coit Tower. It turned out, however, that the publicity about Candlestick was our undoing. After all the press coverage, local architects and engineers began to complain to politicians that out of town consultants were getting too much work from the City and County of San Francisco. Robust hiring preferences were quickly adopted, and ironically, Interactive Resources was never again allowed to have a contract with the City and County of San Francisco.

It was the thick of a momentous battle between the Oakland A’s and the San Francisco Giants: the 1989 World Series, the baseball event of a lifetime for Bay Area fans and players.

The A’s were up by two games and the third was just minutes from getting under way on a balmy October evening at Candlestick Park, when the ground suddenly lurched in a geologic version of the seventh-inning stretch.

On TV sets across the country, it all came through as a jostled camera view, a brief comment about a quake from ABC sportscaster Al Michaels, followed by static, a black screen, then a quick cutover to newsman Peter Jennings, and what began as a festive finale to the baseball season turned into a nationally televised disaster alert.

To many fans in the stadium, however, it was just another day in California earthquake country. They knew it was a good shaker, to be sure. The power flickered off in the ballpark, but otherwise there was little altered in the sturdy stadium. Without cell phones in every pocket, people initially had no idea of the tragedies unfolding in San Francisco, Oakland and beyond. In fact, many expected the lights to surge back on and the game to begin.

But that didn’t happen. Soon, word of broken bridges, fires and collapsed freeways began to trickle through the crowd. No one panicked, but tension swelled and a stubborn traffic jam ensued as 62,000 people tried to get home to their families.

Baseball was suddenly the last thing on their minds.

Lifelong Giants fan Jon Leonoudakis had come up from Los Angeles for the game. A filmmaker by trade, he had his VHS camcorder at the ready, giddy to document this special day, even taping shots of himself in the mirror that morning in full Giants-fan regalia, then interviewing fans tailgating in the parking lot. Twenty years later, Leonoudakis, 51, has turned his footage into a half-hour documentary called “5:04 p.m.: A First Person Account of the 1989 World Series Earthquake Game.” (To see portions, visit web.me.com/jbleonoudakis/Jons_Web_Site/%225_04_p.m.%22.html)

“I was waiting in line for hot dogs on the mezzanine level,” he said. “Then it started shaking. People around me froze like statues. There was nowhere to go. I looked up and saw that huge concrete lip of the upper deck and thought, ‘If that comes down, well, that’s it.’

“But it stopped,” he said. “We all thought life would go on and the game would be played. People even kept going to their seats.”

Beth Elliott, of Oakland, was also in the concourse, standing in the beer line. “I looked up and I saw the walkways swaying,” she said. “What I remember most was some idiot just decided he had to run outside and nearly knocked me down. It was a really good shake, but afterward people were chanting, ‘Start the game!’ and, ‘Home field advantage!’ ”

Down in the A’s dugout, catcher Terry Steinbach was waiting with fellow players for pre-game ceremonies and player introductions to begin.

“We heard a rumble that sounded like an airplane,” he said last week from his home in Minnesota. “I saw the overhang doing, like, a crack-the-whip kind of thing. Somebody yelled ‘Earthquake!’ and we took a few steps out of the dugout, but no one knew how much had happened at that point. We were thinking we’d resume introductions and start the game.”

Gradually, everyone realized that wasn’t going to happen, and fans began milling out into the parking lot. Yet even then, the impact hadn’t hit home.

“Amazingly, it was still a festive atmosphere at that point,” Leonoudakis said. “People were out there tailgating. By and large, there was no major damage or injuries at Candlestick. A couple of pieces of concrete had fallen in sections 51 and 53, and I videotaped a rather inebriated guy who was carrying around a chunk as a memento.”

In about a half-hour, though, news began to come through on transistor radios.

“All of a sudden, I could feel the tension just ratchet up,” Leonoudakis said. “It was a sense of, hey, we gotta get out of here.”

Steinbach and other players were still in the stadium.

“A fan in the front row had a small black-and-white TV with a coat hanger stuck in it for an antennae,” he said. “So we kind of hung around that for a while and started to see how bad it was in the Marina district and Oakland. Then it came down from the officials to get your families and get out of the stadium.”

Steinbach’s wife, Mary, worried about their 2-year-old daughter, Jill, who was at home with a baby sitter in Alameda, ran to her husband’s arms as the players made their way to the team buses. It would take them four hours via San Jose to get back to Oakland.

“It took forever to get out of there,” Elliott said. She eventually made it out on a shuttle bus, then took another bus and a short walk to a friend’s house in San Francisco.

“As it got darker, I started noticing the lights of Brisbane and the lights across the Bay were not coming on. I could see the smoke rising from the Marina fires. The reality started to sink in.”

Ten days later, after the feverish rescues and cleanup efforts, the damage and the loss, there was a general urge to return to normalcy in the Bay Area, and Major League Baseball officials gave Game 3 another go.

“Professionally speaking, we were two games away from achieving the ultimate goal in our profession,” Steinbach said. “But yet the humanitarian part, and the personal part — lives were lost and there was a tremendous amount of destruction. You felt compassion and concern, and baseball seemed pretty unimportant.”

Leonoudakis didn’t have to blink an eye about it. He still had a ticket and was determined to see the game.

“I parked in the same place, and interviewed many of the same people again,” he said. “But it was a very different vibe this time. It was as if Candlestick had turned into a church. There were solemn ushers handing out programs with lyrics to that song from that old Jeanette MacDonald movie, ‘San Francisco,’ about the city rising from the ashes of the 1906 quake. The wacky ensemble from ‘Beach Blanket Babylon’ was leading the song like some kind of unusual church choir. The stadium announcer said, ‘Why don’t we all turn and shake hands with each other.’

“Before, the vibe was highly competitive. We’re going to crush the A’s and stuff,” he said. “But then, we were all just baseball fans. Just people who came to experience this thing together.”