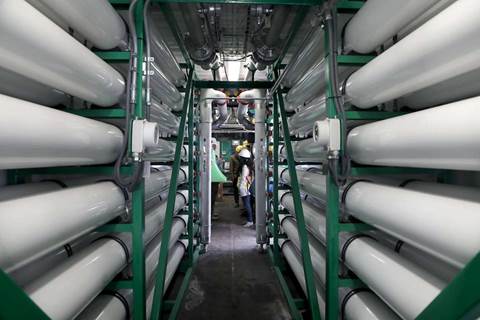 From 2011 to 2016, I was project manager for Interactive Resources on a project for BART to repair extensive leaks into the BART Powell Street Station that had plagued BART for decades and had stymied continuous previous repair attempts.

The solution ultimately involved injecting urethane grout through the ceiling of the station into the soil above to create a new waterproofing system to replace, or augment, the original Bentonite system that had failed.

Our investigation revealed a complicating factor that had played a role in both exacerbating some of the leakage as well as thwarting previous attempts to repair it. It turned out that there was an ultra-high temperature steam pipe running the length of the station above the ceiling in the soil above. Despite extensive insulation and encasement in concrete, the heat was raising the temperature of the surrounding soil and could even be felt radiating through the concrete ceiling. The steam pipe was operated by NRG and supplied steam to a number of buildings bordering Market Street.

In the process of trying to get more information about the configuration and temperature of the steam pipe, I had several meetings and discussions with representatives of NRG.

About the same time, and unrelated to the leaks I was working on, I learned that about over 80,000 gallons daily of fresh, clean underground water was being pumped out of the lowest level of the BART station and dumped into the sewer. In San Francisco, the sanitary sewer and storm sewer system are combined into a single system for treatment.

I saw an opportunity to both save NRG money on water purchases and reduce the inflow to San Francisco’s sewer system. I facilitated discussion between BART directors and NRG, both of whom committed to pursue the matter.

My job was done, and I didn’t hear much else about it until I read the article below from the July 23, 2019, Chronicle. Much to my pleasant surprise, I found that my idea for recycling water was now operational, saving 15 million gallons of drinking water annually.

And yes, we also fixed the leaks.

Fifty feet below the platform of the Powell Street BART Station sits the starting point for one of the largest water recycling projects in San Francisco — one that’s transforming dirty groundwater into clean steam heat for hundreds of downtown buildings. In the process, it’s saving tens of millions of gallons of drinking water annually.

For decades, BART officials treated the naturally percolating groundwater that pools beneath the BART stop as a nuisance and a potential flooding risk. After seeping into an underground cistern, millions of gallons of water a month was pumped into the city’s sewer system.

But just across Market Street from the station, one of the largest water users in the city, Clearway Energy, saw a precious resource going to waste and an opportunity to reduce its substantial water bill.

Company officials realized that if they could collect and clean the water draining beneath the train station, they could significantly scale back Clearway’s use of drinking water.

“We thought, ‘Isn’t there a way to tap that (groundwater) and use it for something useful?’” Judd said.

With the help of a $500,000 grant from the San Francisco Public Utilities Commission, the company installed a 1,000-foot pipeline and replaced aging sump pumps to transport the groundwater to its Jessie Street plant, instead of into the sewer system. The company also invested around $3 million into a water-treatment system needed to scrub the brackish water of minerals and large debris that would otherwise build up in the company’s pipes.

“When you’re taking a train, whatever you see down on the tracks, that’s what ends up here,” Judd said. Needles, beer bottles and other unsavory debris routinely end up in the energy center’s holding tanks. But, Judd added, the water has to be made cleaner than drinking water before it gets boiled into steam.

The energy center started processing the recycled water this year and is on track to save around 30 million gallons of drinking water annually. That’s enough to supply 2,000 San Franciscans with water for a year. The SFPUC estimates that each person in the city uses about 42 gallons of water per day.

“This is a tremendous opportunity to save water,” said Paula Kehoe, director of SFPUC’s director of water resources. “It was traditionally viewed as waste, but it’s actually a resource.”

Through its grant program and other initiatives, the agency is looking to encourage water conservation — particularly practices that don’t require the water to be transported long distances to be recycled.

“Having the water source close to where you’re going to actually use the water really makes for an ideal project,” Kehoe said.

A similar on-site water-recycling program got under way this year at the Moscone Center, where rainwater, foundation drainage and other water sources are being cleaned and reused to flush toilets and water trees and for street cleaning in the nearby Yerba Buena neighborhood. The project is expected to conserve around 15 million gallons of drinking water annually.

Over time, climate change is expected to produce more extreme meteorological swings, including intense rainstorms that will strain San Francisco’s aging sewer system, as well as droughts that will put an increasing emphasis on water conservation.

“In San Francisco, and throughout California, we need to continue to prepare for the effects of climate change by being more resourceful when it comes to our water supply,” Mayor London Breed said in a statement. “We are committed to environmental sustainability and protecting our scarce natural resources, and this innovative and groundbreaking project will help us conserve millions of gallons of clean drinking water.”