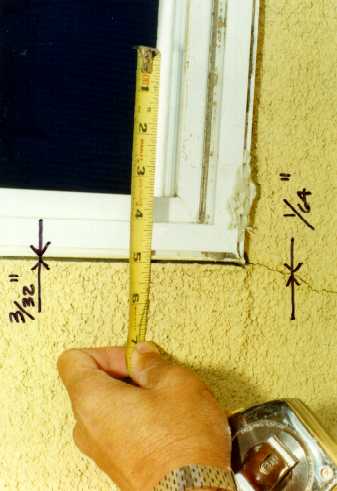 In a recent investigation by Interactive Resources of water intrusion into stucco walls, it appeared that the leak path was through an unusually large joint between the stucco and the frame of vinyl windows.

Thermal Expansion of Building Materials Used for and Adjacent to Windows

The coefficient of thermal expansion of vinyl (PVC) is nearly four times that of aluminum and nearly 14 times that of wood. When used with stucco, which tends to shrink slightly as it cures, vinyl frames appear to contract sufficiently to provide a small but significant gap around window perimeters. Water intrusion into the gap may be sufficient to cause fairly quick degradation of paper-based weather-resistant barriers, resulting in wetting of framing and sheathing. Even when plastic or all-bitminous flashings are used, it appears that water intrusion can reach and deteriorate the surrounding paper-based weather resistant barriers. A similar gap occurs around aluminum and even wood windows, but it is so comparatively small that water intrusion is not typically a problem unless other flaws exist. It appears that the difference between aluminum and vinyl is enough to enable aluminum windows to function successfully while vinyl may not, even though the detailing and installation is the same.

Feedback Regarding This Article: